The Challenge: To run 100km in 28 days.
Organiser: Great Run – with profits going to NHS charities.

It is probably fair to say I have made a little scratch on the surface of this target rather than a dent after the first week.

Monday 11th May 2020
A rather blustery and chilly morning saw me walking and mini-jogging (the best way to describe my strange movements) to the park a few hundred metres from my home. Still keeping it local! The walk and little bouts of jogging serve as my warm-up. If I am feeling particularly energetic, I also throw in a few arm rotations. Windmills. And the entrance to the park is opposite the end of Windmill Avenue. How poetic life is in Kettering.

I set out to complete 5km of continuous running, with the option of doing a bit more on top of that – a two-slice venture. It was actually quite a struggle. I think the blustery conditions (wind speed up to 28mph at times) made it difficult, and psychologically I am not really a Monday runner. I completed the 5km but unsurprisingly did not take up the option of doing more.

It may sound strange, but there is also a psychological shift caused by metric running when I have always run imperially (not in style, in miles!). I struggled with my sports watch to change the units – the display showed kilometres but the lap timer counted miles. No wonder I’m confused. Only another 95km to go. 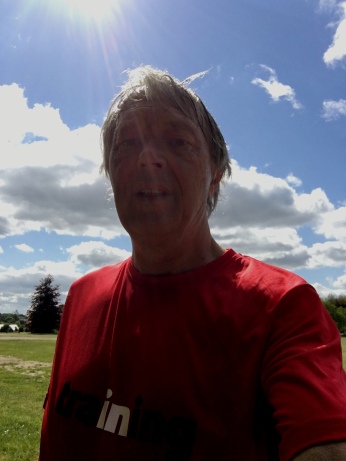 To the park again, this time in bright sunshine. I did not feel hopeful of meeting my target of 5km because I noticed a few twinges in my lower back and left knee. However, I pushed on and managed to hit the target as I came over the wooden bridge for the second time. Encouragingly, this was my fastest completion of this course since re-starting my training. I chose a fairly flat route because hills still present quite a challenge for me – more work needed here! I had to work a little harder at avoiding people because the park had become a bit busier with the relaxation of some of the lockdown restrictions, but everyone was being respectful of each other. Only 90km to go.

Sunday 17th May 2020
Hey, a big day today – I was allowed to drive to one of my favourite running routes now

some of the travel restrictions are being eased. A lovely sunny morning welcomed me to Titchmarsh Nature Reserve. My initial idea was to go to the Brampton Valley Way, but on second thoughts I decided against it because the path is quite narrow (it is the course of an old railway track) and this would not be conducive to social distancing.

Unfortunately, my mind and body were not working in harmony today. I had hoped to go a bit further than 5km, maybe with two bites of the cherry. In the end, I only managed to squeeze out 4km. I think the main contributory factor (apart from my poor general level of fitness) was the terrain. I had become used to mixed surfaces while running in the park, but here in the nature reserve it was mostly grassy and uneven ground. One stretch in particular presented a challenge – it was baked mud along the river’s edge and I was fearful of turning my ankle and/or falling into the river. The last time I ran along here I had to turn back because it was a quagmire:

“I did encounter a bit of a muddy dilemma though – I got half-way through the patch pictured and hesitated a while trying to judge if it was better to continue forward or to retrace my steps. I took the latter option. Oh, echoes of that great poem by Robert Frost, which I have re-titled as The Muddy Path Not Taken”. (From my Running Into Spring post)

So, at the end of the first week I am 11km behind where I hoped to be, with 86km to go. I am confident that I can make up the deficit as my fitness improves.

Thank you for following my story.