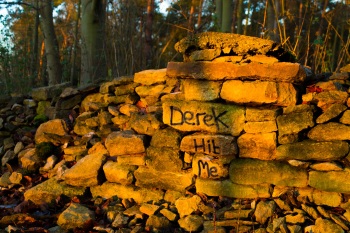 I missed a trick with last week’s post when I literally ran into a wall – well, at least kind of stumbled against it. This week I had an encounter with the metaphorical wall that elite endurance athletes like myself try to avoid.

Yesterday was my last long run before the big event. I approached it with mixed emotions – a bit of dread at how hard I remembered last tear’s – [oh, a Freudian slip of the finger – I meant “year’s”] – final long run to be, and a bit of excitement that I could really put myself to the test. It all started so well, a lovely sunny morning but not too hot, with a very gentle breeze. The first 4 miles seemed to go very nicely, jogging into the village of Stoke Doyle (twinned with Barcelona). As I left the village on the way to the small town of Oundle (twinned with Moscow – only joking!), I could see the 210 foot spire of St Peter’s Church

rising through the treeline (I didn’t know it was 210 feet at the time, that was only after the event when I researched it – a lot of work goes on behind the scenes to craft these posts!). That was where I was heading, but then as I rounded a bend, it was on the other side of the road and no nearer. I kept on running, but it did not seem to get any closer – it had taken on the ever-receding quality that Brighton Pier had for me towards the end of the Brighton marathon. It was a little arrow in my already fragile psychological armour, and I began to wilt a little. A couple of jelly babies gave me a bit of a boost at that point. And herein lies the problem…

I was feeling a bit queasy when I got up on Sunday and just had my normal basic breakfast. I should have consumed a bit extra before leaving the house – a slice of malt loaf, an energy gel or bar, or another banana. First error – not fuelled up sufficiently.

My second error was going for a faster pace at the beginning. I sailed through miles 5 and 6, and was feeling good at mile 10 (through the other side of Oundle, probably 3 miles past the church, very close to the village of Cotterstock). Things started to get tricky after passing back through Oundle, on the slow drag up to Stoke Doyle and beyond. I knew from previous runs this was a challenging section. My rebellious right hip flexor was starting to make itself known again. Still, I pressed on, and managed to hit mile 15 witihn 3 hours (which is not too bad for me). This was part way up the steepest part of the run, coming over the little bridges at Pilton and heading up to the Achurch turning.

It was somewhere between miles 15 and 16 that my energy deserted me. My hip was sore, my calf muscles hovered on the edge of cramp, and I felt a painful tightness across my back that I last experienced towards the end of the Brighton marathon. So, my third error was failing to maintain good posture and keep myself relaxed. My fourth error was badly misjudging my nutrition strategy. I skimped on the jelly babies and delayed too long in taking an energy gel (more experimentation – I was a little anxious because use of gels in the past had caused some stomach pains, but this was a different brand/formulation). I ended up walking the final 3 or 4 miles, and distances seem so much further when you go slower!

So, I’m pleased that’s over. I can now enjoy easing off a bit. I hope I have learnt some important lessons. I still feel confident that I will cope on the big day, although I’m beginning to think that 26.2 miles is not my distance! I will keep you posted about my progress during this period of tapering….

3 thoughts on “Running into the Wall”