In the pantheon of elite r 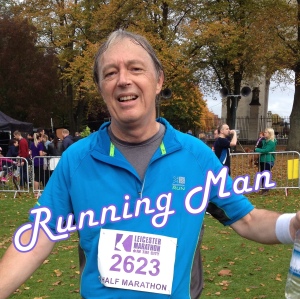 unners, one may think that the abbreviated runner is a close cousin of the inebriated runner. This is a fundamental error, due to putting too much importance on rhyming – which, incidentally, is the curse of the poetic runner, who can also be found in the pantheon, just ahead of the pathetic runner.

Now, I have worn all of these badges at various times. The inebriated runner used to be seen running through dark streets, heading in a haphazard way to the station to catch the last train home. The pathetic runner is me stumbling towards the end of a training run, not knowing if I’m wet because of the rain or my exertions, and generally looking like I need to be rescued. The poetic runner needs no explanation – I have been known to write and perform a bit of poetry, and my running style has been described as “poetry in commotion” (by me).

So, to the main purpose of this post – the abbreviated runner. This could apply to those times when the distance completed was less than was originally intended. This might be due to a number of factors operating independently or in combination – choose from physiological, psychological, emotional, meteorological, geographical (getting lost, fallen trees, hills where you forgot there were hills), metaphysical and philosophical (“why am I here?”). However, my intention is to offer a little peek into the terminology we elite runners use in our daily discourse. I did not want to make it too obvious, so only the most dedicated readers who have got this far will be able to reap the rewards.

Group identity is often fostered and defined by a common language that is not understood by others – think of Cockney rhyming slang and Polari, for example. I have made a little list of common abbreviations, including some of my own. If these become widely known (unlikely with my small but select readership!), I could be expelled from the federation of U.K. elite runners (which, tradition and good taste dictate, we don’t acronymise).

FT = fast-twitch muscle fibres, used for short bursts of intense activity. [This has also been seen as “Fast Twit” – like the guy I saw the other bright and sunny day in fluorescent running gear – including gloves – engaging in ostentatious striding. And he didn’t even acknowledge me as a kindred (but non-fluorescent) spirit!]

PTSD = permission to slow down. Strange as it may sound, this is an important piece of advice you need to give yourself at times during training. Running slower allows you to run for longer (see FT and ST above).

PE = perceived effort. This is a way of measuring the amount of work you are putting into a training run, independent of any wearable devices that record your pace and distance. It is a good way to get a feel for your physiological and psychological preparedness. There are days when I can move like a gazelle, with ease and grace. Other days, I feel like I have the legs of an elephant. Be accepting – work with how you are.

PB = personal best. The fastest time we achieve over a given distance. These are the equivalent of the “likes” on our social media posts – they give us a little dopamine hit in our pleasure centres.

I am 2 weeks away from the Leicester half-marathon. I am not confident of getting a PB, but I will do my best anyway. Further updates in due course.

6 thoughts on “The Abbreviated Runner”