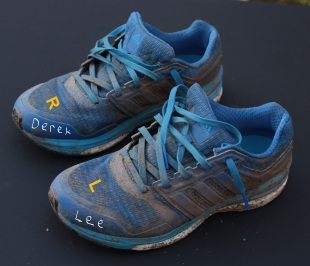 It is not widely known that we elite athletes have to sign up to a solemn code of practice once we put on our personalised running shoes. These are not personalised in the sense of having our initials embroidered on them (but I daresay this could be an option), rather they match the degree to which we pronate or supinate when running. This refers respectively to the extent our feet roll inwards or outwards as we run. I tend to slightly over-pronate, which I think adds to my specialness.

Today I was in maverick mode and broke at least two of the solemn running rules. Firstly, I did not do a Sunday long run! Can you believe that? A golden rule of marathon training broken without an ounce of guilt – in fact, I laughed when I saw it mournfully look up at me as I ate my breakfast in front of the TV.

Secondly, after a couple of hours faffing around in a state of indecision this morning, I finally decided to go for a run. Now, another important rule is that you have to know what kind of run you are going to embark on. You have to have an objective in mind. Guess what? I didn’t! My objective was to run a bit until it felt enough, then come home. It was a bright morning, but there was a brisk and very chilly breeze to contend with. I couldn’t even be bothered to plan a route – force of habit led me to my usual place, in much the same way as I always order the same thing from the take-away menu. This is running by numbers. Egg fried rice with sweet and sour chicken balls. Add that to your “must have” running foods!

I set off too quickly to make it qualify as a recovery run, I didn’t fancy any hills or speed work, and I didn’t want to stay out too long in the cold. I enjoyed my surroundings and tried to focus a bit on my running style – previously described as poetry in commotion. I tend to get tense across my shoulders, so I have adopted a “rag doll” running posture to counter this – my arms flop aimlessly at my side. I think I make quite an attractive rag doll actually, one you would be proud to take to a cocktail bar, so long as there was a dark corner where they have forgotten to light the candle. I don’t run in this style all the time, that really would be ridiculous – just long enough to release the tension. As an elite runner – possibly momentarily lapsed and wanted by the running police – I am also supposed to pump hard with my arms, especially on the uphill bits. Well, let me just say that there is not going to be any public pumping of my arms anytime soon.

Thirteen weeks to go until the 2018 Edinburgh marathon!!

7 thoughts on “Running Against the Rules”